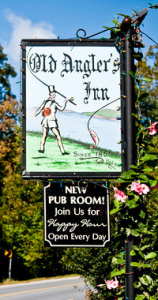 Each year we start our reprise of Robert F. Kennedy’s 50-Mile Walk near the Old Angler’s Inn in Potomac Maryland, roughly 12 miles outside of DC. For those not familiar with the area or the towpath, the OAI has been around a long, long time. For many, it seems as old as the canal itself, with its roots dating back to 1860.

As the towpath lost its original purpose as a waterway transportation route replaced by rail, it began to take on a new form as a man-made nature trail along the beautiful Potomac River. One of the key advocates for the C&O Canal towpath was Justice William O. Douglas.

Olympia Celea Reges, a Greek immigrant who fled a post-World War II refugee camp, and her husband bought the building in 1958 and renovated it to provide the charm of an old country inn as a quiet destination to escape the busy city life. She was a very sociable and well known host who was very proud of the restaurant. To this day, the old fashioned charm of a country inn can be felt through its doors. But there was one memorable day, May 6, 1961, where some may not have felt that warm welcome. 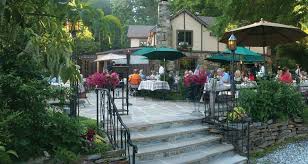 It was a very rainy day and the restaurant had just undergone renovations. As with many fine restaurants of the day, the Old Anglers Inn had a certain elegance and dress code for its diners. But, through the doors a party of at least five men and a woman came in dripping wet. They draped their wet ponchos on the tables and unwrapped their homemade sandwiches, ordering only drinks and water. They had walked about 12 miles from Washington D.C. to Potomac along the C&O Canal towpath.

“I run this place to make money, not to serve tramps,” Mrs. Reges said, to the disruptive and the underdressed diners. “Get off that rug. Get over there with the rest of the wet ones,” she told Sen. Paul Douglas, the distinguished Illinois Democrat. To usually dapper Interior Secretary Stewart L. Udall, an exasperated Mrs. Reges said: “You look like a bum. Get out!”

“Do you know whom you are ordering around?” one hiker asked. “Well, is he going to clean up the mess you make?” she retorted, pointing to the puddles on the floor. The hikers retreated out the door.

The party of hikers also included Supreme Court Associate Justice William O. Douglas, a former Florida governor, a rear admiral, the wife of press secretary Pierre Salinger and a Washington Post writer and photographer who posted pictures and the story which made it to the front page of many newspapers. Despite the negative publicity, Olympia Reges refused to apologize for the outburst. “What would you have done?” she said. “Well, I am a very temperamental woman, and I say what I think!”

She later realized that Douglas, chairman of the Senate Judiciary Committee, had jurisdiction over a bill that would allow her sister, Elena, a Macedonian immigrant, to receive permanent resident status. Mrs. Reges also began to worry that she would lose her business license and be deported because of the incident, but her fears were allayed by another customer, Chief Justice Earl Warren who later told her that she lived in a free country now and was free to evict the attorney general, a Supreme Court justice “and anyone else who abused her hospitality.” He also gave her his private office phone number and urged her to call him if anyone ever tried to bother her over the matter.

The matter blew over and her sister immigrated but the story of Olympia vs. the Supreme Court became a proud legend of a determined woman, a storied place, a special hike and the trials and tribulations immigrants. In the end, it’s a story about the value of being welcome.

The Old Anglers Inn continues to be run by her son Mark Reges carrying the great tradition over the last 60 years but with a modern and open welcome to all strangers that walk in the door.